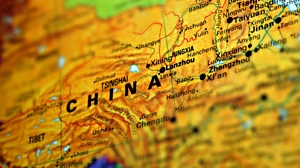 The first point I would like to make about trips to China is this: you soon discover that, despite not understanding their language culture or politics, we in the UK have more in common with the Chinese folks one meets than with the Americans. The Chinese and English are as one people, divided by almost everything except the importance of relationships. And in China, relationships are everything.

This China trip is part of what appears to be my Grant Application Month. First there was the BioCatalyst and European grant applications for my Nottingham spinout, then the long slog of the RGF Round 4 application for the China-UK-China business and now the 3551 Talent Grant application in Wuhan for our Chinese subsidiary (our Chinese operating license was FINALLY received on 13th March, just 9 short months after we started the company setup process – a process that would take around 24 hours in the UK).

The 3551 application takes place on the Wuhan Biolake Science Park, Hubei Province some two hours flight time West of Shanghai. The park itself appears to be something of a miracle to UK eyes. Prior to first breaking ground in Nov 2008 it was a greenfield site (and lake). Now it houses over 400 companies in a 15 square kilometre area, developing interconnected parks for startups, bio-pharma, med-devices and agricultural biotech and generating around £4bn per annum in revenue. Not bad for its first five years of existence. http://en.biolake.org 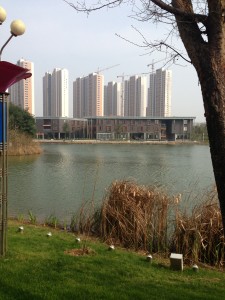 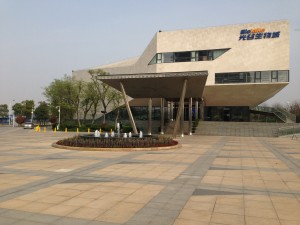 Wuhan Biolake Admin building, and view across the lake to the pitching venue (with inevitable building works in the distance)
You can tell from the poor quality that these pictures were taken with my iPhone – the quality of the light and sky that is, not the pic. All official photos in China have a ‘Photoshop-ed’ blue sky with a smattering of puffy white clouds dropped in. Rather like tourist pics of Scotland.

The annual 3551 Talent Grant is in its 6th application year now and the process is pretty slick. After a written submission is assessed, around 100 lucky applicants get invited to the famed Oral Defence. You don’t get much notice so UK applicants need to have visas ready! The Oral Defence is a highly regimented pitch involving a 10 minute presentation (strictly timed, with a buzzer to stop any academic daft enough to try to actually explain his or her technology in that time), with slides formally submitted in advance and a 10 minute question and answer session. Mobile phones are confiscated by officials before one enters the room and the judges’ names and identities are withheld. Unlike in the rest of Chinese business, giving gifts to the judges is forbidden. No golfing hats this time.

Most of the judges, of which there are 10 arranged in a wide arc in-front of the applicant, are strictly Chinese speaking so an interpreter is essential (actually you get 5 extra minutes of presenting time as a result). Interestingly the focus really is on the talent – if we don’t get through (there is a 50% hit rate) then it will be because I didn’t bring one of our Professors with me. The Chinese love Professors. The judges expect that any successful applicant will spend at least half their time in Wuhan – though the term ‘in Wuhan’ seemed to be interpreted pretty liberally by the handful of hopeful non-China-based companies in attendance.

China supports its winners, whilst in the UK we all too often seek to prop up the losers and least able.

The 3551 series has been extremely successful for the Park in bringing biotech talent to the region. Not surprising when the grants on offer are what the Chinese call “Free Money” ie money with very few conditions attached (and certainly no equity requirements). The Wuhan officials will offer further grants if a company is successful, with increasing sums on offer. In effect, a 3551 grant is your intro. After that Wuhan will support you every time you can show that you are successful. This again is a difference between China and the UK. China supports its winners, whilst in the UK we all too often seek to prop up the losers and least able.

But if the pitching process was slick, the rest of the trip was anything but – a typically Chinese smoky blur of private, alcohol-fuelled round-table dinners, running for rearranged flights after enduring helter skelter (cheap) taxi rides hooting our way over the pot-holed motorways, late nights, early mornings and chilli with everything in Wuhan, Spicy Food Capital of China. With an Indian-born wife I am pretty familiar with spicy food. But at breakfast too?

On one’s own when in China one tends to live in a private bubble, separated from the world by your lack of language skills. Whilst travelling, this can merely be disconcerting. Whilst trying to understand the banter between judges during questions in the 3551 pitch, or when being asked to sign a bank document placing a signature next to a few Chinese characters that are your Chinese company name and director title, the language barrier is immense.

in China we must go fast. All the time.
There is no time to consider

I don’t like being in the bubble one bit but what can I do about it? I have decided that language is the first step so the Chinese lessons are underway. They haven’t gone far just yet – I aspire to one day speaking Chinese as well as my two year old currently speaks English – but I will persist with the weekly one-to-one lessons with Leila in Shanghai via Skype, and have promised my team that I will present in Chinese at the end of our two year product development schedule. The natural Anglo Saxon reaction to the Chinese love of chaos meanwhile is to try to cure it with some organisation. This appears futile. “Oh we wish we had time to go slowly” groaned a Chinese colleague, with both pride and despair “but in China we must go fast. All the time. There is no time to consider.” If you are clever enough to find a local partner whom you trust as your eyes and ears in China, then be prepared for a hectic ride each time you visit.

My trip to China 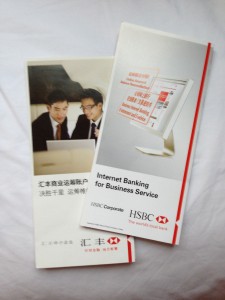 this time was incredibly short – arrived on Sunday and flew out again on Tuesday – so the only other activity of note that I managed to do in addition to the grant pitch was to set up a bank account for our new Chinese subsidiary. This process is different too (of course). We wanted to set up the account with HSBC whom we bank with elsewhere in the world but this is not as easy as it sounds because the Chinese entity is entirely separate from the UK bank, and subject to different rules and regulations. Some Chinese advisors would say that we should instead set up with a local bank more accountable to local partners but my Board are cautious of Bank of China or similar.

Bizarrely HSBC’s office in Wuhan is set up in a business facility within one of the local hotels. We needed to set up both a Capital Account for transactions to and from the UK and a local Renminbi RMB account. We can control each account via the internet BUT any transfer between the capital and local account need to be evidenced with an original copy of the company ‘chop’. This is like the old wax stamp that we used to have in the UK, but is a red ink printed stamp (or one of four alternative stamps) used to evidence company ‘signatures’. I also needed to confirm my identify by passport, and to make the usual specimen signatures. In China you have to do this under the eagle eye of a digital video camera (actually the local HSBC representative then had to act out a farcical ‘passport check’ for the benefit of the cameras too). Banks have additional responsibilities in China – including the reporting of transactions to the local tax administrators. But the outcome is: we have a new Chinese subsidiary, new Wuhan bank account and we might just get some local funding to accelerate our product development.

So what else did I learn this trip?

Firstly, I had forgotten about the famed One Child policy first applied in 1979 and applicable to families living in cities. This policy fines city-dwelling parents that have more than one child (most rural families can apply to have a second child if their first-born is a daughter). Implications, apart from some reduction in population growth rate as targeted by the measure, are only now starting to be understood. In the UK we worry about the age distribution of our population and the burden of an aging population on those in employment. In China the issue is already extreme: the one child policy has resulted in a marked imbalance in population. The spoiled Little Emperors of the one child policy, used to getting everything they desire from their two dedicated parents and four dedicated grandparents, are now growing up to realise that they will need to support up to 6 dependent relatives each – the so-called “4-2-1 Problem”. This will result in an inevitable welfare crisis. As a result the policy has been relaxed a little – parents who are both single children themselves are now permitted to have a second child – and the policy may be dropped altogether before long. But some estimates suggest that by 2020 China will have a higher proportion of elderly dependents than any other country. Tough to cope with, even with 7% or 8% annual growth rates.

Secondly, I forgot how little coffee is consumed in China, unless one is in one of the Western hotels. After a couple of days, the caffeine levels drop and the headaches remind you that even Starbucks would be welcome (actually you can now find most of the big coffee brands, as well as shops badged with logos remarkably similar to US brands, in all the main centres but I just never get round to frequenting them when I have so much traditional fayre on offer).

Thirdly, the gift tradition starts to rub off on you. Having arrived in China suitably laden with golfing hats from Scotland, scarves from Burberry, red wine from France and cook books from England I find it hard to return empty handed, even from such a short trip. So … teas, Chinese shawls, beautiful kites, red jewellery and a particular Chinese snack beloved by my eldest son as a result of his recent three month Internship in Shanghai all have to be stacked in to the overhead locker on the plane. But I do love the relationship culture and gift giving.

this article’s simple message can be summarised in three words …

And finally? Well re-reading what I have written I began to worry about the rambling content of this piece and to wonder what the real message was that I wanted to get across when I started. An offer to help others access Chinese funding is certainly part of it. But most of all I think that, beneath the meandering account, the simple message can be summarised in three words: “Come to China”.

So I arrived back in the UK last night, and back to Grant Application-like activities as I summarise our research work in support of our current R&D Tax Credit claim. But I fear that my heart is still elsewhere.